Barely back to Paris since yesterday, we will be at Alternatiba Paris tomorrow, Sunday 27th of September. Alternatiba is a World event (mostly present in France) which mostly focus on climate, ecology, but also alternative social models, more human and fair. It went in many cities and will end up in Paris, place de la République, this week-end.

Well we will be there in the “Libre Village”, particularly in the “cinema” and “museum” booth, close to other communities, projects and association of Free Software and similar movements (April, Parinux, Framasoft, Franciliens.net, la quadrature du net, root 66, Chiffrofête, Mozilla-FR, Drupal, Novalys, Libre Office…).

We will represent the LILA association, ZeMarmot animation film project, and do a few GIMP demos and presentation.

Come see us if you are around Paris!

P.S.: we’ll make a small report of our trip to the Alps where we got very cool references for ZeMarmot, very soon. We’ll just need a few days to have some rest after this exhausting journey!

So we are now in Saint-Véran, highest village of France (third in Europe) where marmots are just everywhere. For our first day there, we encountered quite a few marmots, made nice photos, videos and sound recording, and found some nice spots which may become a cool burrow for the hero of ZeMarmot.

Also thanks to Magic Lantern, the Free Software allowing us to do cool videos with our Canon EOS 50D (which had no video feature officially!).

Hop, a small preview video of a marmot getting its nose out of its burrow (CC Attribution 4.0 International):

We have started a dozen days of research for “ZeMarmot” Open Movie. By this, we mean we are going for a trip to the Alps, where we we will stalk cool marmots! Our goal is to get photos, videos and sounds, of marmots, other animal and awesome mountain landscapes. These will be used for reference for the animation film, to study marmot behavioral patterns, movements, get ideas, and so on.

We actually started in the Massif Central, the center mountains in France, since it was on our way south. We stopped by Mont Dore, where we hiked for a day the Puy de Sancy, since we read that many marmots were living there (reintroduced by mankind after disappearing… probably because of mankind anyway!).

Well the day was not the most sunny, and it was quite windy, so apart from some mouflons from quite far, we could not find any marmots. I imagine they would not get out in crappy days. I wouldn’t if I were a marmot!

Well… until the very very end, just when we were getting back, and when the rain started, a small ball of fur ran just a few meters in front of us! It ran inside its burrow, but we camped in front for a dozen minutes, and it slowly came out again. So for a first day, we were quite happy. We at least got our first photographs and videos of a marmot!

Now the bad news is that our 64GB UDMA7 CompactFlash card died while we were transferring all the photos and videos on the computer, the next day! We lost at least 71 photos (many of them of the said marmot unfortunately) and 1 video in my count, and maybe more, and we’ll have to buy a new one tomorrow, before we are heading to the Alps for the main part of the research adventure.

See you soon for the next update!

While I have been working for days on the animation software for ZeMarmot, I wanted to “rest” my brain a little and came back to an old project of mine, which I should have implemented months ago.

So let’s get the troll out straight away: yes, this is about the split between save and export on GIMP. Now I was not there when the decision was taken, but I think it makes sense anyway. Saving is about “your work”, your process. XCF is — in such a view — not an image format, but a project format. It contains much more than the final visual image. Same as you would not save a “.mpeg“, “.avi” or “.mov” in blender, but a “.blend“, you don’t save a “.jpeg” or “.png” either, but a “.xcf” (another analogy for developers out there: “.blend” or “.xcf” can be compared to your source files — which is definitely what they are in a multimedia project — and the image or video formats as the compiled binary).

Yet I understand that some users have a hard time understanding this since there are nearly no difference in our GUI between saving and exporting.

What’s the difference, you’d ask? And you’d be right.

In the last 2 days, I refactored the whole GimpFileDialog code, which was completely mixing every concepts with hard-to-read if {} else {} statements inside a single class. GimpFileDialog became a generic parent class, containing only logics common to all file dialogs, and I added 3 specific children: GimpOpenDialog, GimpSaveDialog and GimpExportDialog.
This will allow us to do easily much more interesting graphical interfaces specific to each process.

As a proof of concept, I tested a “Scale at export” feature, which would allow to rescale images at export time, without touching the original. Who indeed never worked on some high resolution image, then needed to export it in lower resolution (to upload on some website, send through email or whatever…)? The current GUI would force to scale the original image, export it, then not forget to cancel the scale afterwards (if you forget, save and quit — for instance by habits — you are doomed: you just completely lost data and hours of high res work!).
Here for a UI test: 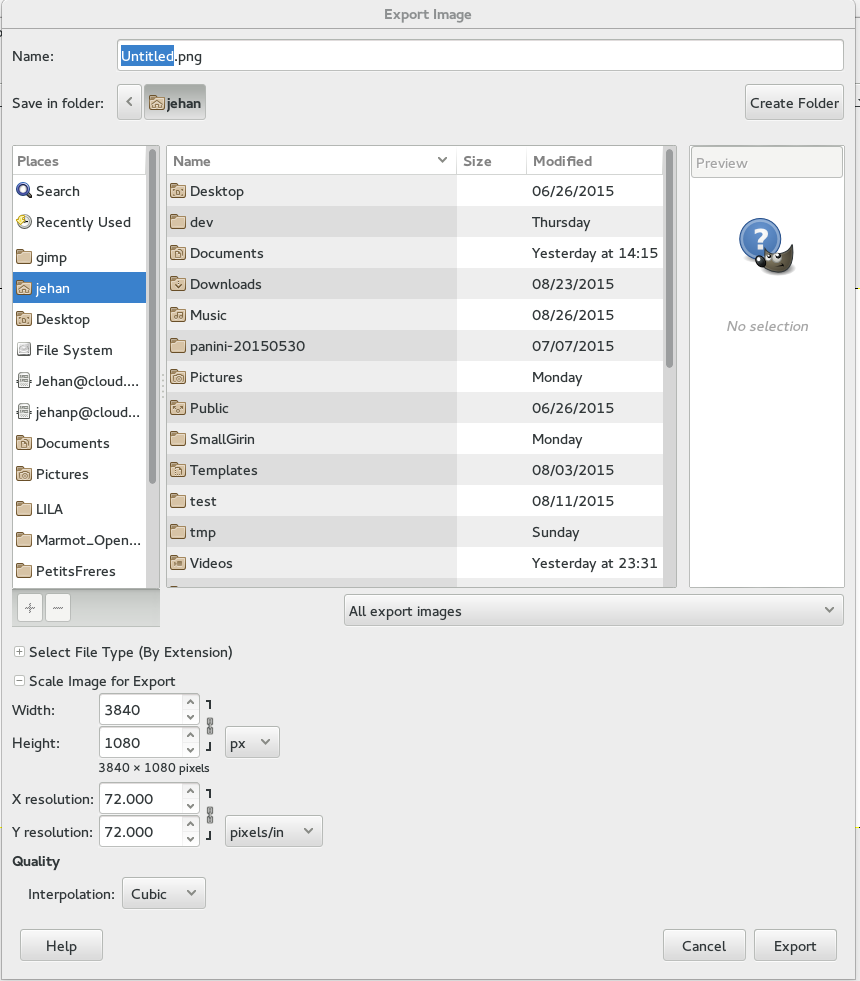 Now before you tell anything: I know that the above screenshot does not look so nice, with a lot of wasted space on the right. I reused an existing widget (the same used in the “Scale Image” dialog, if you know GIMP well) and have not been trying to customize for this first version. The goal was mostly to test the new refactored code and we have some more thinking and discussion before actually adding these features (there are many more things that could be rethought to improve export, at deeper levels too).
The refactoring is now merged to master; the “Scale at export” isn’t yet though (feel free to test it on its git feature branch though, it’s functional).

Of course this is only the start of greater things. One may want to crop an image, change the color space (particularly if you were working in non sRGB), or even apply any GEGL operation before export (like “sharpen” after downscaling).
This should all be possible soon. Of course we’d have to work on the ideal UI to not clutter the export dialog. I will keep readers updated for when the next steps will occur.

I believe this is partially what some people would call a “Save for Web” feature, though I personally don’t like this naming since it is far too restrictive. You may want to change your exported image for far many more reasons that just “the web”.

Now I’ll be back to ZeMarmot (and I remind everyone who wants to support me to improve GIMP they can still support our Open Animation Film)!